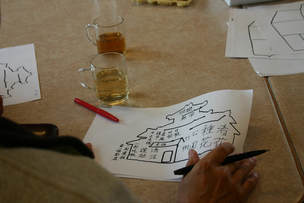 In Amsterdam there is a flat which is specially build for elderly with an asian (Chinese) background. Named Foe Ooi Leeuw. Together with Cultuur en Ondernemen, YD+I and seven other artist we were doing research what the elderly need in their new home. The way to do that is using workshops and other activities to know each other better and to find out they wanted something nice but practical. They also wanted that the building has more character.

Empty house, full stories
The endless halls in this building made me sad so I decided to do something about that. I thought this building could be a good book but it needed stories (from the elderly) and illustrations. So I took care of the illustration part. In front every elevatordoor I made a giant painting inspired by Chinese symbols. To protect the residents of this house. Every time the doors opens you will see a new chapter.

Surprise
Extra side effect was that the apartments on the opposite site of the elevator were sold. For a long time nobody wanted those apartments because of the Feng Shui rules. An elevator has bad energy so better by another one. But after hanging my paintings the houses were sold easily because the bad energy was reflected by the paintings.

Lots of elderly, who are immigrants will love to live with each other. In typical Dutch nursing homes they would become isolated from the others throughout difference in food, interests and language. A special home for these groups will be ideal but often the municipalities, housing corporations and project developers don't have any clue what the futures residents wishes are.

Since 2009 you can find this place, Foe Ooi Leeuw in Amsterdam Southwest. It has 54 apartments for around 80 residents. During the development of this building the projects developers listened to the residents. Also they asked artists to help to design and research what these elderly need in their future home.

The artists took care of the interior and worked together with the residents to refine their wishes so the project developers and housing corporation would knew more. For example they found out that the residents had the wish to have a big spacious public kitchen. In the original plans there was no space for that. Further the artists designed utensils for the establishment like a community calendar and paintings.
Copyright 2018 Hoi-Shan Mak