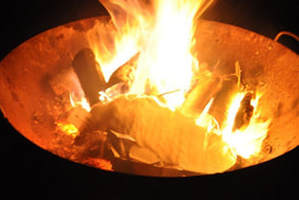 What would you give to somebody who isn't here anymore? During Allerzielen Alom (All souls) I run a small shop where people can buy a gift for their loved ones. All made out of white paper and cut/folded in all kind of shapes. Like cigarettes, glasses or a guitar. Most of the time the most simple objects are the most populair.
For a small donation people can buy it and send it to heaven. This project is inspired by the Chinese way of sarcrefise.

One night Sem (5) came with his parents. He wanted a gift for his little brother. When I asked him the age of his brother, his mother answered that he was still drinking milk. Oeh, that's a tough one but directly I asked Sem which present he thought his brother would like. He pointed out a huge car. He liked that one.
Together with his parents we wrote the name of his baby brother and Sem's name on the car so that they know in heaven whose gift it is.
After receiving his donation we went to the fire and put the car on fire. His father had a small flashlight with him and during the moment he showed Sem that the gift was on his way by the smoke. At the end Sem asked his father: "Do I need to get burned to go to heaven?"
Copyright 2018 Hoi-Shan Mak